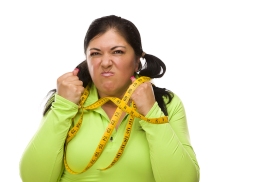 Even the most disciplined of us occasionally overeats, helping ourselves to seconds or even third portions, especially on holidays or at parties.  This is not a binge eating disorder.  It becomes a disorder when the bingeing occurs regularly and is accompanied by shame and secrecy.  The binger is deeply embarrassed about overeating and vows never to do it again.  However the compulsion is so strong that subsequent urges to gorge themselves cannot be resisted.

The DSM-V, released by the American Psychiatric Association in May 2013,  legitimizes the suffering of millions of Americans by designating  Binge Eating Disorder as a psychiatric illness which may make it possible to get the cost of treatment reimbursed by insurance.

According to the DSM-V, binge eating disorder is characterized by several behavioral and emotional signs:

In addition there is marked distress regarding binge eating present, it is not associated with frequent inappropriate behavior such as purging, excessive exercise, etc.  Also it does not occur exclusively during the course of bulimia or anorexia.

There are many reasons people binge.  Everyone uses food to meet needs other than hunger sometimes.  It is not about an “event” of overeating.  It is about a “pattern of behavior”.  It’s also important to remember the relationship with food and eating behaviors are the symptoms of more profound underlying factors for most people with Binge Eating Disorder.  Individuals with Binge Eating Disorder use food to:

While the exact causes are unknown, several factors are thought to play a part in binge eating disorder. The combination of causes and risk factors varies from person to person. Possible factors include genetics, a history of significant weight changes due to dieting or restrictive /irregular eating patterns, depression, mood disorders, weight related discrimination or bullying, problems with significant relationships, trauma and loss, emotional abuse or neglect, addictions, and sexual trauma.

The experience of living with binge eating disorder is as distressing as any other eating disorder and often accompanied by a belief that it is a willpower issue and they are simply not “strong enough” to stop.  Within a diet and thin-focused culture, the focus has been on weight loss as the goal. This “treatment” is often promoted by well-intentioned friends, family, and professionals. But with binge eating, dieting is a causal factor in the development of binge eating disorder. So it’s essential for treatment to provide alternatives to dieting for improving health and body image. In fact, weight loss as a goal of treatment—as opposed to goals of improved self care–can be damaging to the process of recovery.

For recovery to be lasting, people typically work with trained therapists, physicians, and others to address any underlying mood disorders, family dynamics, and complications from trauma. Ultimately, individuals must learn to treat themselves with the compassion and self-awareness needed for lasting recovery.

Recovery is typically an ongoing life-long process of growth and insight. But change is possible.  Treatment is about helping people and their supporters begin this process successfully and knowing it will not be a perfect journey. There will be ups and downs. But over time and with proper treatment, those with binge eating disorder can find a much more peaceful relationship with food, their bodies, and themselves.

But nothing changes until something changes!  Help is available.  http://www.crossroadsprogramsforwomen.com    800-348-0937

Bonnie Harken has been in the eating disorders treatment field since 1987. She was a founding officer of Remuda Ranch Centers serving as a Vice President until February 2002. Since February 2002 she has served as the Managing Director of The International Association of Eating Disorders Professionals Foundation (iaedp). She has also served many major eating disorders treatment facilities as a consultant.  In 2013 she opened Crossroads Programs for Women in Pekin, IL.